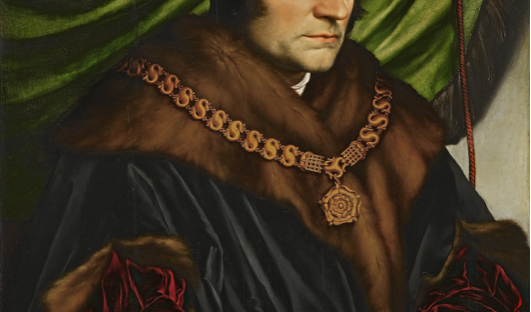 For those interested in the technical side of portraits, this image is painted using oil and tempera on wood and the date is 1527.

In 1527, More had been in office as Chancellor of the Duchy of Lancaster for two years.  Holbein arrived in 1526 carrying letters of introduction from More’s friend, the scholar Desiderus Erasmus of Rotterdam, and so started a relationship between the German artist and the most powerful man in England, other than the king.

Erasmus and More had been friends ever since the early part of the 16thcentury and Erasmus had stayed with the More family in 1509.  During that time he and Sir Thomas had translated the works of the first century Greek satirist and rhetorician, Lucian of Samosata, whose eighty surviving works ridicule superstition, the paranormal and various religious practices.  When they had finished that work, Erasmus composed an essay In Praise of Follyusing similar sarcastic rhetoric to Lucian.  Erasmus attacks the then current practices of the Church (i.e. the selling of indulgences and other money raising practices) and what he saw as certain superstitious elements as being an abuse of Catholic doctrine.

Clearly the two men enjoyed a similar sense of humour and had parallel intellectual interests.  In the following decade More wrote the satirical novel (in Latin) Utopia wherein he pokes a moral finger at the rich and powerful describing them as ‘greedy, unscrupulous and useless.”  Considering his office, the publication of this satirical criticism of the wealthy demonstrates that Henry VIII’s Chancellor was not one to balk at pointing out the flaws in the characters of those monied aristocrats at court.  More had written the bulk of this tale while he was in Antwerp in 1515 and completed it when he returned to London.  His friend Erasmus did the editing and the book was published in Leuven in 1516.

Erasmus had dedicated “In Praise of Folly” to More, theLlatin title of which is also a pun because, Moriae Encomium, could also be understood as “In Praise of More”.  In 1516 an edition of this little book appeared from the press of the Basel publisher, Johannes Froben, and a young German artist living in Basel was commissioned to illustrate Erasmus’s essay. That young man was Hans Holbein the Younger.

The third edition of More’s Utopia was also published by Johannes Froben who used a design by Holbein for his all publications created in 1516-17.  A copy of the Froben edition is held in the Royal Collection (reference RCIN 1086970). It is not inconceivable to think that someone must have sent Sir Thomas a copy of this third edition. Therefore, in 1526, when Holbein arrived in England clutching not only letters of introduction, he possibly already knew of More’s writing.   He also carried one of his portraits of Erasmus as a gift for Sir Thomas.

Holbein painted three portraits of the Dutch scholar in 1523 and came to England via Lucerne in Switzerland, France and northern Italy.  This particular portrait is thought to be one of those three and is on show in the National Gallery, London but is part of the Longford Collection, Longford Castle, Wiltshire. It is possibly not the one given to Sir Thomas, but the one presented to Archbishop Warham. I think it is safe to say that Erasmus was very aware of the power of portraiture and clearly Sir Thomas also wanted to be recorded for posterity.

Holbein was coming to an England that was not yet embroiled in the Protestant Reformation.  Anne Boleyn was yet to become the centre of the king’s attention and the king’s break with Rome was not even a glimmer on the horizon.  On the contrary, Henry VIII had written his defence of the seven sacraments of the Catholic church in 1521 and as a result,  the title Fidei Defensor had been conferred on him by Pope Leo X.  No doubt Holbein hoped he would find work at what was still a Catholic court.

The 1527 portrait of Sir Thomas shows a man wearing sumptuous clothes wearing his gold chain of office as Chancellor of the Duchy of Lancaster; a closer look reveals that this is someone who works very long hours.  Sir Thomas appears distracted as he looks into the distance, but his eyes are red rimmed and his expression is grim.  Behind him is a green curtain and as well as acting as a background, to highlight the sumptuous gown, and red velvet sleeves, unlike the curtain in the 1527 portraits of Sir Henry Guildford(Royal Collection – click his name to open the portrait in a new tab) and his wife, Lady Mary (Art Museum, St Louis, USA -click her name to open the portrait in a new tab) , the green curtain behind Sir Thomas reveals a white space – perhaps a wall?  His elbow rests what appears to be a wooden shelf and he holds a piece of paper.  This image leaves us wondering what weighty matters are being considered, and how much longer will he continue working into the night?  Will Sir thomas continue working until his eyes can no longer remain open, or until the candles burn low enough to gutter and go out?

The Royal Collection has many of Holbein’s sketches of More’s family, including the one for the portrait now in the Frick.

Another sketch (RCIN 912225) is inscribed with an 18thcentury hand as also being of Sir Thomas, but it seems to be of a much older man, so perhaps this is of his father, Sir John.

Elizabeth’s sister, Cecily (RCIN 912269) who is pregnant (below).  More’s adopted daughter, Margaret Giggs, has been identified as the sketch reference RCIN 912229, but previously the same 18thcentury hand has labelled her as Mother Iak (aka Jak – the I and J being interchangeable).  This sketch is below and, like the others, forms part of the collection of Holbein’s preparatory sketches in the Royal Collection Trust.

The existence of the various sketches of members of the More household shows Holbein was clearly welcomed into the bosom of the family and these culminated in a now lost group portrait set in the More home.  The Holbein museum in Basel has a sketch for this portrait, complete with the artist’s notes.  Sir Thomas is wearing his chain of office, and his father is seated next to him.  From the inclusion of the older man we can conclude that Holbein was working on this before Sir John More died in 1530.

Originally, this canvas had been created as a gift for Erasmus and sometime after the scholar’s death, ended up in the collection of Carl von Liechenstein, bishop of Olmutz.  Unfortunately there was a fire at the official castle of the bishops of Olmutz in 1752 and the original painting was destroyed.

However, in 1592 Nicholas Hilliard’s one time apprentice, Rowland Lockey, re-created the portrait (held by the National Trust’s Norstell Priory).  In his draft treatise of 1598, Hilliard states that he had ever been inspired by Holbein’s work, despite the German maestro dying in 1543 some four years before Hilliard’s birth in 1547.   That Lockey was able to re-create the original group image is evidence that Lockey must have had access to Holbein’s sketches after his apprenticeship to Hilliard.  Sir John Lumley had collected many portraits and sketches and these are recorded in the Lumley inventory compiled between 1586 – 1595. Whether Lockey had access to the Holbein sketchbooks through Lumley’s collection is unknown, but logic dictates that from the dates of Lockey’s copies, if these were in that collection, he must have done so.

There are further versions of the More family group that are thought to have been created by Lockey, including this one in the primary collection of National Portrait Gallery, London.  This one differs considerably from the original Holbein sketch and suggests that the various individuals that were not alive by 1593, for example Sir John More, were based on the sketches in the original Holbein workbooks.  Why Lockey created differing versions of this group portrait is unknown, and will have to wait for another day to explore his possible reasons for doing so in depth.

Much more recently, the original Holbein group painting is described on page 210 of Hilary Mantel’s Wolf Hall as follows:

“The favorite, Meg, sits at her father’s feet with a book on her knee. Gathered loosely about the Lord Chancellor are his son John; his ward Anne Cresacre, who is John’s wife; Margaret Giggs, who is also his ward; his aged father, Sir John More; his daughters Cicely and Elizabeth; Pattinson, with goggle eyes; and his wife, Alice, with lowered head and wearing a cross, at the edge of the picture. Master Holbein has grouped them under his gaze, filed them forever: as long as no moth consumes, no flame or mold or blight.”

The fact that Lockey was recreating further copies of Holbein’s family group portrait at the end of the 16thcentury suggests that perhaps these were created for Catholics wanting a reminder of Sir Thomas, who had died for his adherence to his faith and refusal to sign the king’s Oath of Supremacy.  It is thought that the NPG version, painted in 1593, was commissioned by Sir Thomas’s grandson.

Holbein returned to Basel in 1529 and by the time he returned to England in 1532, Sir Thomas was in direct conflict with the king.  In the May of that year, Sir Thomas resigned his position, retiring to private life.  The rising star at the English court was Thomas Cromwell and, of course, the woman at the centre of all the king’s problems, Anne Boleyn.  The returning artist decided to walk away from Sir Thomas and his fellow humanists, and hook his talents to Cromwell and the Boleyns.  He already had a private clientele within the various merchants of the Hanseatic League, based at the Steelyard (Cannon Street railway station is where we think this yard once was), which gave him an income without having to rely on court patronage – aristocrats were notoriously late payers.  However, the year after Sir Thomas’s execution he was to become King’s Painter with an official stipend.

You might think that the More family would want nothing to do with Holbein now that he was being employed by those who had replaced their father and brought about his end.  However, the artist’s portrait miniature of More’s daughter, Margaret Roper, held by the Metropolitan Museum of Art in New York, suggests otherwise. The portrait is thought to have been created shortly after Sir Thomas’s execution on 6thJuly 1535 and you only have to glance at it to see how the artist has captured Margaret’s grief.  The level of emotional detail is palpable and to capture that intense sorrow in paint, Holbein had to have met with Margaret and seen her anguish for himself. We need to remind ourselves that this image is less than a couple of inches in diameter despite it being much larger on screen.

We should not condemn our artist for switching his artistic allegiance away from the humanist circles that had originally welcomed him in England, because he needed to make a living.  Without Holbein’s creative genius Sir Thomas More would just be a name on a document; likewise the faces of many of the More family would be left to our imaginations. If Sir John Lumley had not saved those sketches then Rowland Lockey would not have been able to paint his copies of the family group for Sir Thomas’s grandson and possibly other Catholic adherents at the end of the 16thcentury.

This article first appeared in July on www.QueenAnneBoleyn.com as part of the series of articles commemorating the execution of Sir Thomas More (6th July 1535).

In Praise of Folly: Desiderus Erasmus (available in translation from Amazon)

Freelance lecturer on art history and all aspects of history. Currently researching the creators of illuminated manuscripts of the latter part of the 15th century. Principal of Ashtead Art Lovers - founded in 2007. View all posts by Melanie V Taylor