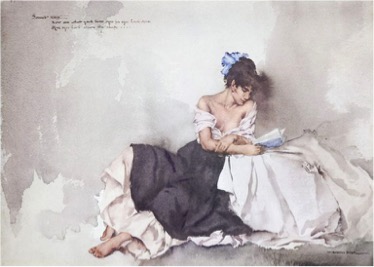 Thy beauty’s form in the table of my heart;

My body is the frame wherein ’tis held,

And perspective is the painter’s art.

For through the painter must you see his skill,

To find where your true image pictured lies;

Which in my bosom’s shop is hanging still,

That hath his windows glazed with thine eyes.

Now see what good turns eyes for eyes have done:

Mine eyes have drawn thy shape, and thine for me

Are windows to my breast, where-through the sun

Delights to peep, to gaze therein on thee;

Yet eyes this cunning want to grace their art;

They draw but what they see, know not the heart.

This watercolour evokes a feeling of tenderness between the artist and the model.  A print of this painting was bought by my stepfather as a wedding anniversary present for my mother because he said Russell-Flint and Shakespeare portrayed his love for her so much better than he could ever say.

There are many interpretations of this sonnet by scholars of literature, but as far as I am aware, no art historian has every written about what it might mean in art history terms.  I throw my ideas into the pot and will put my tin hat on for onslaught by the nay sayers, but before they all start telling me to get back in my box, I ask them to consider my thoughts.

When Shakespeare wrote this sonnet his (educated) audience would have recognised one of the original meanings of the word ‘steel’d‘, which I believe has become lost over the centuries.  Before the introduction of graphite pencils artists often used silverpoint or gold point to sketch , as well as other metals known collectively as metalpoint.   Metalpoint is a very unforgiving medium and mistakes cannot be rubbed out and by using the word ‘steel’d’ here perhaps we are being told that the image of the beloved is sketched indelibly on to the ‘table’ of the heart.

The large portraits were known as ‘table’ portraits and were for public consumption.  Should we therefore take a double meaning from this?  Firstly, by suggesting the portrait is a large one it seems that just the sight of the loved one makes the heart swell within their lover’s breast? And secondly, because this ‘table‘ image is hidden on the lover’s heart, perhaps their love has to remain hidden too?    Russell-Flint is portraying his lover in a large painting and, by including the first two lines of this sonnet, he is guiding us to read the picture as a declaration of love.  Our lady is reading a book, presumably from the title of the painting we can deduce it is a book of Shakespeare’s sonnets. Russell Flint is teasing us in just the same way Shakespeare does with his layered meaning, but the painting is not as complicated as Shakespeare’s sonnets that may be regarded as being the literary equivalent of the portrait miniature.

In Tudor times miniature portraits became fashionable as love tokens in much the same way that we have photographs on our phones and in our wallets today.  In 1564 during the negotiations regarding a possible marriage between the Earl of Leicester, to Elizabeth I’s cousin, Mary Queen of Scots, the Virgin Queen showed the Scottish Ambassador, James Melville, a miniature portrait of her favourite – Robert Dudley, Earl of Leicester.  In his memoirs, James Melville tells us how the queen drew him into her private quarters and unlocked a cabinet to retrieve this miniature thereby demonstrating that it was a treasured and private possession. It was a privileged private moment between the Scottish ambassador and the queen that did much to tell him of her hidden intentions regarding Robert Dudley.  Melville asks if he could take this portrait with him back to Scotland to show his queen, but Elizabeth declines to give it to him.  Did Dudley give this treasured portrait miniature of himself to Elizabeth so she could gaze upon his image and so “steel’d [his] beauty’s form upon the table in [her] heart” and to keep his love within “the frame wherein tis held.”?  On her death they discovered Dudley’s last letter to Elizabeth in the same locked cabinet where she kept her most treasured private possessions and which, years before, she had opened to show Dudley’s portrait miniature to the Scottish ambassador.

The use of the word ‘perspective’ has troubled critics, but I cannot understand why.  It clearly references more than the way artists create the illusion of depth on a flat surface.  The first line of the sonnet reads – Mine eye have play’d the painter – thus we know the eyes are a metaphor for painting as well as our means of seeing, therefore ‘perspective’ has to be interpreted in more ways than just the artistic sense.  These lines:  “And perspective is the painter’s art, for through the painter must you see his skill, to find where your true image pictured lies” conjures up the image of someone holding a open locket in the palm of their hand contemplating a miniature portrait of their beloved.  Our painter of the miniature has rendered such a realistic portrait that the sight (perspective) of the loved one makes our lover’s heart swell and beat faster, the ribs protecting the beating heart in a similar way as the locket protects the portrait.  The artist has done his best, but the truth is hidden – engraved on the ‘table’ of the lover’s heart.

Shakespeare continues to describe how the sight of the beloved is as the sun lighting up the day and the treasured memory of the beloved’s face hangs within the lover’s ‘bosom’s shop‘ .  Our lover has but to think about their loved one with an inward eye to make them feel on top of the world.  The physical painting is glazed to protect it, as do the eyes of a lover close to protect the remembered ‘true’ inward image.  Their partner’s eyes are the only windows to this lover’s ‘shop’ and only they can see the true image held therein.

The accuracy of the portrait miniature is praised with the phrase “Now see what good turns eyes for eyes have done:”.  Do we have to accept only one interpretation of the word ‘eye‘.  Why should this only represent the eye of the lover?  Perhaps we should interpret the creation of an painted image as collusion by a third party?  “For through the painter must you see his skill ” is both a reference to the painting of a miniature portrait as well as the eventual image.  The painting of portrait miniatures were private affairs and during the two or three sittings of several hours it stands to reason that, human nature being what it is, there may have been confidences. Further on, we come to the line “Yet eyes this cunning want to grace their art”.   By the use of the plural ‘eyes‘, Shakespeare has introduced a third party suggesting an artist has created accurate (cunning) portraits of both parties.  Shakespeare describes the accuracy of the artist in the phrase ‘they draw but what they see“.  Why refer to a third party at all? The final line, “knows not the heart” tells us this other set of ‘eyes’ cannot know the love contained in the hearts of our lovers, despite being able to paint a likeness which stirs their heartstrings. The third party is clearly the artist.

In his draft treatise of 1598 the artist & goldsmith Nicholas Hilliard tells how it is necessary for an artist to have a reputation for discretion and that this was as important as being able to paint accurate likenesses.  Hilliard’s portraits are layered with private messages through the use of mottoes and symbols and we have to make an educated guess at their meanings.  In many ways the use of visual symbols and obscure mottoes in portrait miniatuares is just as baffling as the layered meanings behind Shakespeare’s sonnets.  Unlike the artist Hilliard, Shakespeare is able to keep the gender identities of the loved and the beloved ambiguous.

By reading Sonnet XXIV we are intruding on an intimate declaration of love that has, for some reason, to be kept private.  By including the two first two lines of the sonnet on his watercolour Russell-Flint is clearly declaring his love for this unknown lady.  If anyone knows the work of Sir William Russell Flint will recognise that this woman is the subject of many of his paintings.

Freelance lecturer on art history and all aspects of history. Currently researching the creators of illuminated manuscripts of the latter part of the 15th century. Principal of Ashtead Art Lovers - founded in 2007. View all posts by Melanie V Taylor

1 thought on “Mine eye hath play’d the painter”